A Mercerie and a Wanna-be

If you read my last post, you already know, I have been feeling pretty lousy. Apparently one does not recover from pneumonia at 60(-3months) as quickly as one does at 45.
When Mr. O and I left home, the plan was to have a leisurely 2 weeks at our son's. I have a quilting buddy who lives close by and we had at least 2 quilty days planned. One was at a quilt show, and the other was to sew the whole day away...a sort of mini retreat at which time I would get to make the Sept. Schnibbles; Mercerie by Carrie Nelson. We laughingly said that we would get the husbands to tend on us as far as breaks and meals. ( we forgot to tell them though lol)
Well, we ended up extending our stay by one week, at our daughter's out West, so that left fewer leisure days here. To complicate things a bit further, I ended up getting sick before leaving our daughter's home,( I think I must have picked up something at the hospital when our grand daughter ended up there for emergency...another long story...) which only escalated as I travelled and arrived at our son's.
I have been quite ill, and in bed most of the time here; needless to say, I had to forfeit the quilt show, and so far no mini retreat either, but a girl can always hope.
That meant no Schnibble either...so this morning I foolishly dragged myself out of bed to make my September Schnibbles...Ha!
It took me about 3 hours just to sort and pair my charms! This was going to be a BIG project for me today! 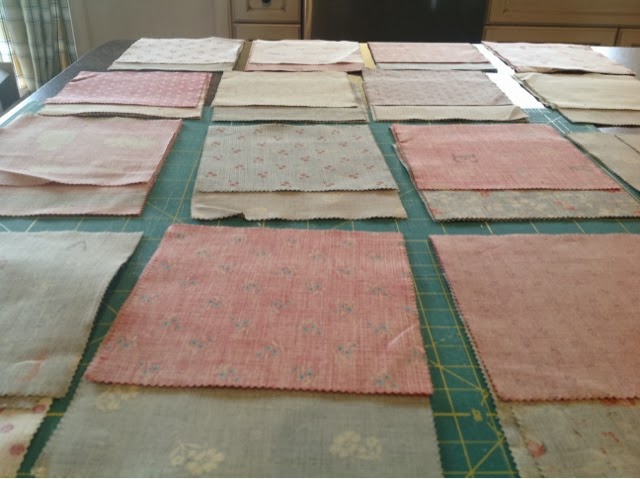 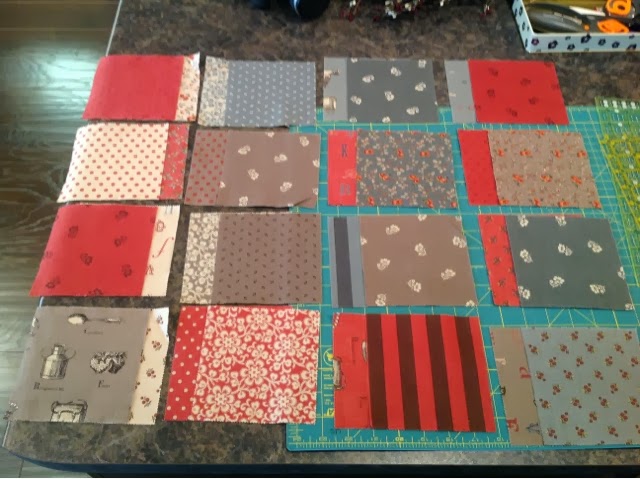 My fabric choice was La Petit Ecole by French General.
Stop for lunch and back at it again, for a couple more hours...well, I had to read the pattern a minimum of 14 times before I made the first cut and even then was second guessing myself...my brain was mush, from fatigue, drugs, cough medicine, lack of sleep and all just feeling really lousy.
I made one block...turned out great! I laughingly said maybe I need drugs to increase my accuracy, so one to the next block.  I decided to stack the charms and cut out enough for 2 blocks at once...
Yup! You guessed it...I made a cutting error x 2. No extra fabric to cover the goof up...so I pieced things back together thinking it won't show after the quilting and washing.
By this time I had to clear away things for supper prep, and by that time I was starting to realize that this Schnibbles was not making it to parade. 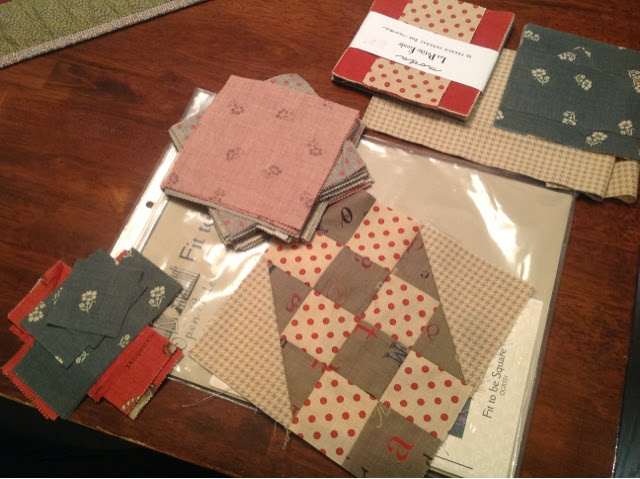 This took me all day!  My Mercerie Wanna-Be.
My first time missing parade in a year and a half...very disappointing.
I thought  I had things so well planned, but a nurse once told me while I sat beside my Mom's bed in the hospital, " you can make all the plans you want Dear, but you aren't in charge."
So true eh?
All is not lost though, because Sue picked up the slack and she has a lovely Schnibbles to show, even if I don't. Thanks Sue! 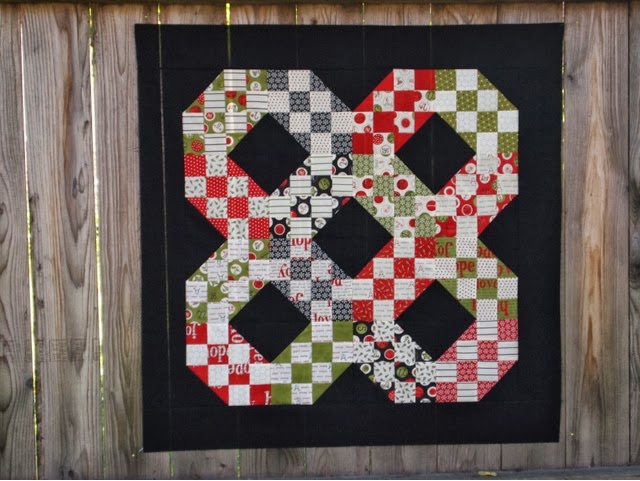 She made her Mercerie in Countdown to Christmas. I am not sure but this must be about the 3rd Schnibbles in this fabric line...I think she likes it. Great job Sue!
So there you have it...one Schnibbles and one Wanna-be. Enjoy the parade!
“Life is what happens to you while you're busy making other plans.”
― Allen Saunders
at September 30, 2013

So sorry to hear your recovery is not as speedy as you would like. Take good care of yourself and you'll be good as new soon.Hugs xo

Oh dear...you poor thing. I hope recovery for you speeds up. And not to worry. Two entries in a parade are quite common these days, I here.
Look forward to your next months entries

I'm sorry you aren't immediately "bouncing back" from your illness. I hope you continue to improve! Your quilt will look great when you get a chance to finish it. I love French General! Sue's quilt is lovely, too. I love the dark background.

Just can't keep a good woman down thanks to prayers and good drugs, you are on the road to recovery! Take it easy, now that you missed the parade, just relax and enjoy the rest of your vacation.

I commiserate with you - in 2 ways. First, I was so bummed the first time I didn't make the parade. Second, I have also been very ill for weeks. I pray you are also on the road to recovery!

Wendy, I'm sorry you missed this month's parade. You and Sue were on quite a roll. I didn't make the parade either, but I don't have any good reasons why. I hope you get to feeling better and hope to see you in the next parade, Clover is too cute to pass up, I'll be in the parade for sure! Take Care!

Oh how I have. Such empathy for you. Bouncing back, it is like a thud and not sure about this back part. I have a long arm waiting for me. Have sewn once never have gotten back. 5 pneumonia's in one year and one that had me in ICU. So from my own expirence it take a good year after pneumonia for all things to get back to having the energy that you had prior. But a little at a time and you will get back. I'm a retired nurse an that is what 5 in a year did for me.
Just wrap up in one of your great quilts and have something warm to drink and RELAX "one day at a time".
Julie

Hope you start feeling better - but I do LOVE LOVE LOVE the fabrics you picked for your schnibbles. Can't wait to see it completed!

Feel better soon Wendy!! So sorry you've been sick! It's not easy to read a pattern when you're not well. I was making Canasta with a horrible sinus headache and I had to rush around at the end because the first part didn't go well. Be sure to rest up and join us again when you can :-) We'll still be here! Sue's version is lovely. The black background looks so nice.